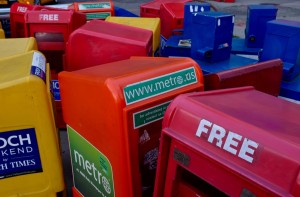 You know the good old days of newspapers have gone, don’t you?

You know that the press release is at best dying too?

If you don’t, here are three more nails for the coffin.

Firstly, the digital first Manchester Evening News have been telling PR people, apparently, they won’t look at what you send unless there is an image or a video attached.

Secondly, when Birmingham New Street re-opened central government comms people by-passed the Birmingham Mail and the BBC and went straight to the Birmingham Updates hyperlocal site with a video for their 200,000 Facebook page.

Thirdly, the Independent newspaper is to scrap its print edition and concentrate on the web. ‘There are not enough people,’ Independent editor Amol Rajan wrote ‘who are prepared to pay for printed news, especially during the week.’

A downward spiral for print

But it’s not just one national title that’s fading from print. More than 300 have closed completely in the UK in the last 10 years.

Brian Cathcart, a journalist professor and Hacked Off co-founder on the day the Independent announcement was made wrote in The Guardian mapped the decline:

“Trace the downward curves of print sales over the past couple of decades and then extend those lines into the future: you will find they all hit zero at some point in the next 25 years or so – and of course they will have to cease publication long before that zero moment comes.

“Indeed for most people under about 25 it is already extinct – a couple of years ago I stopped talking to my students about newspapers because even budding journalists don’t see the point of buying a wad of newsprint every morning.

“The grand tradition of newspapers, sometimes noble sometimes shameful, is coming to an end. Connections that go all the way back to Gutenberg are fraying and we will soon be left with little more than old people’s memories.”

But let’s not be sad

I love newspapers. I worked on them for 12 years and started my career on a Staffordshire weekly carrying pages of type on a hot metal newspaper that used 1880s technology. I’ve had printers ink under my finger nails. It’s sad to see an industry in decline. But watching this trend for communications and PR people is a red herring.

People aren’t consuming the media through newspapers in print or web in the numbers they were.

The future of news debate, I once heard it said, is the most boring debate imaginable. The only people having it are hacks and ex-journalists. Everyone else was already hearing Osama bin Laden was dead on Facebook.

Stats confirm it. Ofcom say the average UK adult spends 15 minutes a day reading newspapers in their hand or online. That’s just over half the amount of time they spend scrolling through their Facebook streams and on their other social media sites. Newspapers are also the least popular way of getting news.

Yet there is an unhealthy fixation with the newspaper industry in some parts of public sector communications. The tyranny of the local newspaper frontpage is a thing.

Print may go but journalism evolves. This is the death of a redundant medium and not the message, Brian Cathcart in The Guardian says. He’s right.

The lesson remains the same

But communications people shouldn’t smugly ignore the lesson here. You may not have to live or die by newspaper sales. Your .gov website may be well placed for SEO. But nobody is queueing up outside their town hall, head office or headquarters for their press release. They’re too busy reading the BBC website, watching a 20-second Facebook video or finding out the football score on Twitter.

Newspapers have woken with a jolt to realise that shorter, sharable, engaging content is what people want. Communications people should pay heed.

The lesson remains the same. Change and get new skills or be irrelevant.

Credit to Albert Freeman for spotting the Independent editor’s comments.

Fail to understand the changing landscape and very soon you won’t have a job.

It’s something I’ve been banging on about for some time now and It’s true whether you are a journalist, comms person or a fifth generation pit prop maker in 1983.

A bright person a few weeks ago told me that there would always be newspapers because they’d always be there.

People thought that about coal mines once too.

As the rise of Twitter as a breaking news medium and sites like BBC that’s just not the case.

Here’s an interesting few quotes from John Paton, CEO of Digital First Ventures who own, as their website says, more than 800 print and digital products that reach 57 million customers a month.

If you aren’t taking it from me take it from a news organisation that has a $1.3 billion turnover.

They are quotes that comms people need to know about because they represent more evidence of the seismic change in the media landscape.

But why switch to Digital First as a company name?

“Digital First is my name. I’ve been saying it long before I got here. The name originally was to say very loudly — in a headline kind of way — that what we thought we did in newspapers, we had to change

dramatically. And that, of course, meant digital first.

“And actually “digital first, print last.” I wanted to hammer home that this idea about the Web as something else we do was ridiculous.”

“The Web was and it should be what we do. Print is something else that we do, which happens — at this moment in time — to have almost all the revenue. But that’s not going to be our future. It was something that I named to try to hammer home that message. It’s kind of funny — I don’t think they have a “digital first” strategy at Google. They have a strategy. The name, hopefully, if we’re successful, becomes very dated.”

On paywalls and digital dimes…

On newspapers going away…

“Newspapers in print are clearly going away. I think you’re an idiot if you think that’s not happening.

“I don’t think that news organizations are dying but are newspapers going to stop running in print? Yeah. Absolutely.”

On making the shift…

“I think we still are too afraid to take the kinds of risks we need to take because there’s so much money tied up in print. We have $1.3 billion in revenue. And of $1.3 billion, $900 million is advertising and $165 million of the advertising is digital advertising. Four years ago, that was almost nothing. That $165 [million] is going to have to more than double in three years. To do that, we’re going to have to take some risks on the print side. That’s the one thing that scares the [expletive] out of everybody.

You can read the whole interview here.

That’s something worth reflecting on.