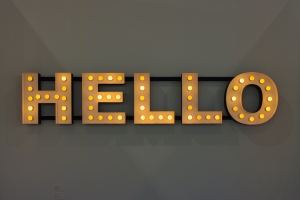 For the past eight years I’ve been proud to be at Walsall Council helping to put them on the digital map and at times doing a bit to define what that map looked like. It’s been exciting. But it feels absolutely the right time to move on. March 31 was my last day and yes, I realise that breaking news on April 1 before midday carries risks. But this is no April Fool.

I’ve now become a freelance digital communications consultant turning comms2point0 into a start-up which means I can bring my expertise, drive enthusiasm and insight to help you do a better job for your organisation. That’s something I’m really, really excited about.

Former Sunday Times editor Harold Evans once said that he loved newspapers but he was absolutely intoxicated by the power and possibility of the internet. Me too. My first of three moments of epiphany came in 1993 when I discovered that I loved the art and craft of piecing together a story for a newspaper.

The second moment came in 2008 as a press officer when I heard the line: ‘With social media we no longer have to go through the Priesthood of journalists to talk to our residents’ and the third in 2011 when a chief executive spoke of the need to stop evangelising about social media but bring solutions that may just have some social media in.

In the next phase of my career I want to bring all three of those together and I’m massively excited and not a little nervous.

In leaving Walsall Council, I’m intensely proud of what I’ve helped do there. I was massively fortunate enough to have worked with a head of communications Darren Caveney who saw what the future would look like and trusted his staff to learn, grow and innovate. We both saw early that social media was not just a communications function. We shared the sweets with others. In leaving Walsall I leave more than 70 social media profiles and more than 100 staff trained. Some of them have gone on to develop into

nationally significant digital innovators in their own right. Countryside ranger Morgan Bowers, for example. Environmental health officer David Matthews too. Dan Carins. And Kate Goodall. I’ve worked with some amazing people during my time there too numerous to list.

I’m proud I listened to Darren and Kate and that we were the first council in the country to use Twitter for 24-hours during #walsall24. We won the first LGComms social media gold award for that but best of all we shattered glass ceilings and in a day we embedded social media overnight. That makes me smile.

There’s a record industry giant you’ll not have heard of called Steve Jenkins. He was MD of Jive Records and was a key part in the success of Pete Waterman and Stock Aitken Waterman. He’s from Walsall and I got to know him quite well. He’s proud of the place. He used to have a railway sign from the town’s station over his desk in his office so people who came in would have to acknowledge it. “Where’s ‘Walsall’?” they’d ask. He’d fix them with a steely glare and say: “It’s nine miles north of Birmingham… it’s nine miles north of Birmingham.”

Walsall is big enough to be it’s own place and has a digital community whose vibrancy that will surprise you. The YamYam is a news aggregation site that brings together traditional newspaper websites with the websites of clubs, societies and bloggers. There’s more than 100 sites linked to it. Some are good, some are bad, some are contrary, some not.

It’s not always been straight forward, but I’ve grown to genuinely respect and admire many in that digital community. They care about their town. Their voice is part of the borough’s debate and discussion. At Walsall Council I’m leaving a stack of people who deserve to be garlanded daily for trying to make a difference in sometimes grim circumstances.

For those left behind in local government communications I’d say be proud, be determined and be very clear that you are a professional bringing value and demonstrate that value. Be the grit in the oyster and challenge. That’s your job.  There’s a whole load of stuff I’d like to write about that.

So, what’s the very exciting what’s next?

I’ll be working at comms2point0 full time. It’s now a company. Three years ago my colleague Darren floated the idea of comms2point0. It’s an idea we kicked around and shaped one sunny day watching a cricket match. We mapped it out with sticky notes, pens and paper.

What is it? We post six links a day for comms people on Twitter and we have a blog which has mushroomed to more than 400 case studies ranging from 10 Downing Street, Unicef, Orkney Council, Unicef and the EU. We now have reached 30,000 unique users a month. That’s a bit crazy, really.

We’ve helped run events, we’ve trained people and for IEWM we’ve written the best whitepaper on using social media in the public sector that has ever been written (disclaimer: I’m biased.)

I’ve been nominated to be a Fellow of the RSA and I’ve been appointed to The Guardian public leaders editorial board. I want to carry on with pro bono work for the localgov digital group.

When I’ve been working late at night on comms2point0 I’ve joked with my wife that this would help me get my next job. It’s now become my job and with Darren continuing to play a big role I’m nervously bouncing with excitement at what it will help people to achieve and is already helping.

I’m working and will be working with IEWM, Public Health Wales, the LGA, a number of councils, the Langstone Society and several others. I’m grateful to those people on my journey I’ve asked for advice and who have been generous in giving it.

The free element of comms2point0 will remain. There will be links. There will be a blog – now more than 400 – there will also be a reactivated regular email. But other rather good things are in development. If I was American or younger I’d be calling them: ‘awesome.’ I’ll still be blogging on my own blog that’s in its fifth year.

So, in saying goodbye I’m also saying hello. It would be good to hear from you to hear what your challenges are and maybe see if I can help. Or maybe just to wish me luck. You can do that via @danslee or @comms2point0 on Twitter or via dan@comms2point0.co.uk.

I’m excited but nervous which is just how it should be. I’m taking a leap but it already feels like the right one. But if you’ve gained something from something I’ve written or shared I’d love to help you further  and tell your friends too. I’ll get you a slice of cake next time I see you out.