Traditional comms is as dead as the boozy lunch with the Town Hall reporter.

Back in the old days a few beers with the right person may have been enough.

Not just because that reporter may now be based in an industrial estate 20 miles away.

The changing face of communications is something I’ve blogged about before.

There’s a whole list of things a press officer needs to do.

For some nice people at LG Comms Scotland I distilled much of this thinking into a presentation.

At their seminar in Dalkeith it was good to see people realising times have changed.

There were some excellent resources posted afterwards to the Communities of Practice site – log in is required.

Here’s my presentation too.

Basically, it covers the following ground:

Social media should be part of everything that we do and the last thing it should be is an obstacle.

Or a bit scary.

It should be part of everything that we do.

Jerry Springer built a TV career by making people in dysfunctional relationships sit down and talk to each other.

With burly minders flanking the stage Billie-Jo and her ex-lover Seth from an Arkansas trailer park would set-to in front of a studio audience.

Gripping stuff it was too, but you had this feeling nothing would change.

Two parties in a sometimes strained relationship came together at Hyperlocal Govcamp West Midlands in Walsall.

For some, it was the first time they’d ever spoke to the other side.

Like a parish pump Relate, there were sometimes a few choice words. But unlike the warring couples on TV there was a growing appreciation of the points of view.

It’s a session that has been extensively covered.

Local government officer Simon Gray, who is not from communications, blogged brilliantly about the session here. When he said neither side appeared with full credit, he’s right.

He’s also dead right in calling on both sides to cut the other some slack.

Paul Bradshaw writing a guest post for Podnosh made some excellent points in how local government should make information easier to access.

Mike Rawlins, of Talk About Local, who also contributes to Pits N Pots in Stoke-on-Trent has written an excellent post from his perspective on this and dead badgers and does, as Simon suggests, cut some slack.

Sasha Taylor has also blogged from the session from a police perspective.

Twelve months ago I wrote a blog post on how the blogger – press office relationship was a source of conflict.

The 10 points I wrote then I still stand by. The full post is here. The edited highlights are boiled down to this

FIVE THINGS A PRESS OFFICE CAN DO: 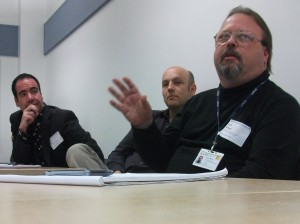 But listening to the both sides talk at the session, there’s also a few things a bright press officer can do.

1.  Create blog friendly content – A conventional press release is tailored for the print media. That’s not necessarily blog-friendly. A short film posted to YouTube or Vimeo is. A two minute film to explain with an interview the points made in the release would work.

2. Add pics as a matter of course – Even if it’s a stock pic. Mike Rawlins of Talk About Local made the point that there is a demand for images. They’re going to source a pic from Google images anyway. Why not provide a good one?

3. Judge when to respond – the excellent Michael Grimes of the Citizenship Foundation re-purposed the US military’s flowchart of engagement with bloggers. It’s good advice when to engage and when to ignore the internet troll.

4. Build relationships – In print media you know you’ll get a better story about countryside placing it with a reporter who is passionate about green issues. So why not do it online too?

5. Put talking to bloggers in black and white. Make it a policy decision. Here’s one from Wolverhampton Homes to show you how.

6. Learn about open data. It’s not a geek topic anymore. It’s come into the mainstream and bloggers are at the forefront. Local data advisor and hyperlocal blogger Will Perrin has pointed out that press officers will need excel skills. Why? Because you’ll need to interrogate data sets just as you’ll need to leaf through council minutes.