For the past three years I’ve believed in the powerfully simple idea of ‘do and share.’

It’s amazing how if you do share good learning end up learning far more yourself in the long run.

It’s something that underpins this blog and powers some amazingly creative people in local government.

It’s also the ethos behind a project called Comms2point0 which I helped co-found. It’s somewhere online that comms people in and around the public sector can make sense of the changing landscape with case studies, resources and ideas. We created it because there wasn’t somewhere dedicated for comms and pr people working in the public sector that did that.

There’s a comms2point0 website where people can blog about an idea or a campaign they’ve tried. You can read it here.

There’s also a Twitter stream that posts six links every workday morning we think comms people may find helpful. They’re delivered on a plate by around 8am. You can follow it here.

I say I helped co-found Comms2point0 but in reality the drive for this has come from the excellent Darren Caveney who I’m fortunate to work with at Walsall Council where he he is head of comms. Darren and his press office manager Kim Neville have created an ethos where good ideas can be tried out and so much of the credit for the good work I’ve done should be reflected for them. Like the look of Comms2point0? That’s Darren that is and his wife Carol Caveney. They built it. They also went for the retro creative commons pictures that illustrate the site. You can find many of them on Flickr as part of the Documerica project. That’s here.

What works on Comms2point0? It doesn’t have to be just cool social media stuff. What’s really good is when it’s a mix of digital and non-digital. That’s when it gets really interesting. It’s how to get an idea or a message through to the iphone user, the newspaper reader and the Facebook enthusiast all at the same time is what really fires my imagination. 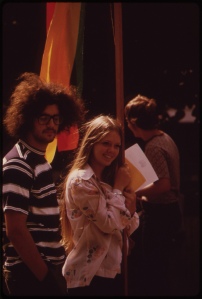 Who is it for? Mainly for public relations, communications people and marketing types who are looking to learn. Nobody has it all cracked. But with the old certainties dliding away, budgets disappearing the landscape is changing. Fail to evolve and learn and you are heading for irrelevance.

More than that, it’s for people who are looking to understand the new landscape. No matter what job they do.

Not everyone wants the time and effort to blog. But you’d be amazed at how unphased comms people are at writing 400 words to order on something they’ve done.

Five months on and we’ve reached 2,000 unique visitors a month and we’ve gone past 850 followers on Twitter. We’re a bit proud of that.

We’ve also chipped in with Nick Hill of Public Sector Forums to stage a rather nifty conference in Birmingham where a lorry load of bright ideas were taken away by 60 people – myself included – about Facebook. We put the resources here. Take a look if you didn’t go. We’re off to Glasgow soon too.

All this we’re quietly ever so proud of. Especially as it’s all been done outside of work time sometimes first thing in the morning with a piece of toast in one hand or last thing once the children are in bed and I’ve got Kraftwerk playing on the headphones.

Here are five blogs randomly selected you may like:

Social media and the council mag – in an era of slashed budgets the council magazine is often first to go. Critics would have you believe they are full of spin. The reality is more prosaic. It’s the bin times and the changes to the leisure centre that people don’t always get to hear about. Either because the newspaper isn’t that interested in council good news or because people stopped buying them a long time ago. Northumberland County Council’s Ross Wigham shared this post. I like the fact that there are good things happening in places far away from unconferences too.

Birds in the nest – Walsall Council’s Darren Caveney wrote this and I love it. It’s a mix of personal and professional and gives advice on how to cope with the changing landscape. Learn new things. Do new things. Shout about them too. Everyone working in comms should read this. Or local government. 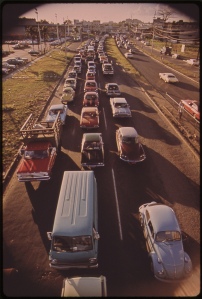 Twitter… the next industrial revolution – There are things the public and private sector can learn from people. In this post Danks Cockbain PR’s Russ Cockbain tells of how he helped put Black Country manufacturers onto Twitter and how one secured £500,000 of publicity on the back of connections made via Twitter. Thems big numbers. It made me more happy than I can tell you that this case study was cited at UK Govcamp in London. “If Black Country metal benders can do it, what are we waiting for?”

It started with a tweet – There’s some really interesting things taking shape at Cornwall Council. Matt Bond talks about how they are trying digital tacks but are bringing their elected members along with them.

Feeling the love for infographics – Gillian Hudson is someone I came across first at the Home Office. She’s a bit talented. She’s now with the 10 Downing Street press team and in this post she talked through how she used infographics as part of a wider campaign. It’s really good stuff.

If you’ve missed it, do follow us at Twitter on @comms2point0. Feel free to contribute too. I’m at daniel.slee1972@gmail.com and Darren is darrencaveney@gmail.com.