The world we live is changing by degrees and its only when you stop and look at the numbers you can make sense of it.

The ‘Online Nation’ report has been published by Ofcom and the Information Commissioner’s Office to map how people are using the internet and what they think. It’s a useful document that helps communicators understand how the UK is changing.

What are the trends that shine through? I’ve taken a look from a public sector communicator’s perspective. The kind findings:

– People in the UK are growing more concerned about the dangers of the internet but we’re using it more.

– Video in the UK continues to grow.

– Smartphones as a way to use the internet in the UK continues to grow.

– People in the UK are receptive to regulation.

Some key points backed by data

Internet use is rising. On average the UK adult is online for three hours 15 minutes – that’s up 11 minutes.

Social media use remains buoyant. A total of 70 per cent of the population have a social media account and use it regularly. That’s 39 minutes of use a day.

But more people have a concern about the internet. Overall, 78 per cent had a concern about an aspect of the internet. Strikingly, younger people are seeing the downside far more. Compared with 61 per cent of adults having a negative online experience 79 per cent of 12 to 15-year-olds have had a poor experience. That’s everything from an unwanted friend request to bullying or trolling.

Music video tops the You Tube chart as the most popular use but how-to guides are not far behind. Music video accounts for 62 per cent of use with 57 per cent ‘how to’ with 40 per cent general search.

Home internet and 4G penetration remains high. In the UK, 87 per cent of homes have a broadband connection with 82 per cent broadband and 70 per cent using 4G. 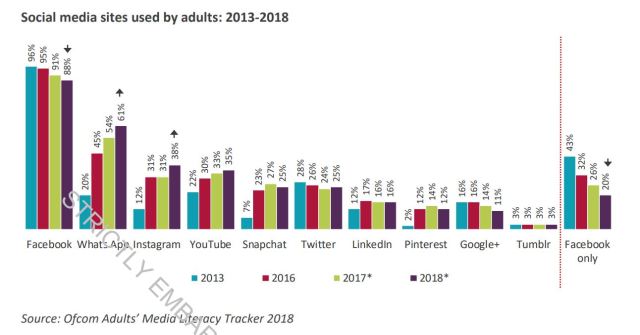 People in the UK are spending more time on the internet. On average, the UK adult will spend three hours 15 minutes online – up 11 minutes year-on-year.

Smartphones remain the a growing way to use the internet.  The average time online on a phone is two hours 34 minutes.

People spend most time every day on Facebook. If the platform on its own wins the most used prize it also wins the prize for the fact that users use it the most every day.

This breaks down as internet use per day in the UK as:

42 minutes a day for Google sites

8 minutes a day for Spotify

5 minutes a day for BBC sites

4 minutes a day for Snapchat, Netflix and Yahoo

Other sites are less than 4 minutes.

Under 13’s are on Facebook in numbers even though they technically shouldn’t be. The platform has a 13-year-old age limit but its really easy to breach it. Research shows that 21 per cent of 10-year-olds, 34 per cent of 11-year-olds and 48 per cent of 12-year-olds are on the site. It’s easy for public sector people’s eyes to light up at this point. But anecdotal evidence of Facebook page insight shows that teenagers are not hooking up with their local council, police, fire or NHS.

Advertising drives social media sites. There is money in them there clicks. But it is being hoovered-up by the big two of Facebook and Google – 61 per cent of ad revenue goes there.

Around one in 10 don’t use the internet and the figure is highest amongst old people. The lowest sector is over 75s with 48 per cent not using it.

Fake news is prevalent. A total of 69 per cent of UK adults have come across it and the most common place to find it is Facebook. But rather than despair this points to the argument that comms people need to use the platform with engaging and correct content.

People are warming to the idea of online regulation. And 70 per cent of UK adults think this wouldn’t be such a bad idea.

The numbers change and how people use the web shifts slightly year-on-year.  Like an unwatched pot if you don’t keep tabs on things the pot may boil over. What worked five years ago or even last year doesn’t work in 2019.

All this points to a flexibility of approach, a readiness for adjusting tactics and above all a readiness to explain and educate. The challenge in 2019 is not to argue for web communication but to take account of people who have had bad experiences. Reassurance strategically in the organisation is needed.

If anything, the increased smartphone use looks like catching out the public sector if websites are not compatible.

Strong internet use stats show that people are using the web. But lower take-up amongst older demographics may shine through to decision makers in the public sector who are themselves older and listen to voters – who tend to be older.

To reach an older demographic off-line tools are still needed, the report would say. But for younger people who live by their smartphone a web approach is paramount.

Nothing sums up the challenge to public sector people more than this.

** Frustratingly, Ofcom don’t treat YouTube as a social network and this stat is found elsewhere in the report.