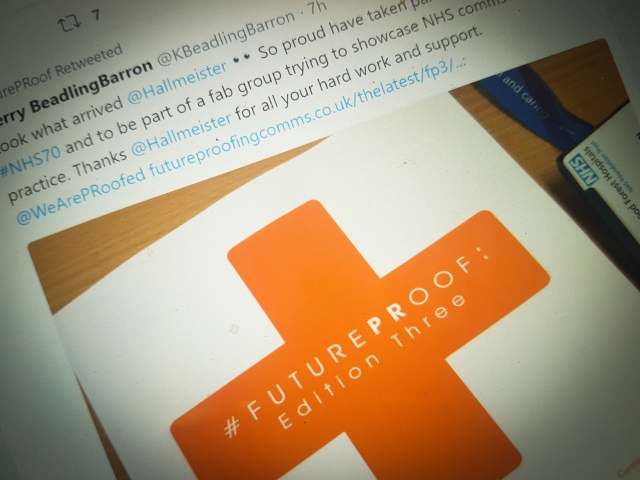 Here are two myths about the NHS and neither are true.

Everyone who works in the NHS is amazing.

Everyone who works in NHS comms is amazing, too.

The NHS-focussed third edition of #futurePRoof came out this week. Published to mark the 70th anniversary of the service it is a collection of 26 essays around NHS communications. You can find out more here.

This could easily have fallen into the bear trap of being a big old back-slapping love-in but the value of this collection of writing is that it does start to ask difficult questions. It is a critical friend as well as cheerleader. Denis Campbell, health policy editor of The Guardian and The Observer, is brought in to give an objective view and bangs the table about the mixed quality of NHS comms people. There are some good and some bad, he says, but it is so important there are more good ones:

“I need the former to win out over the latter for both myself and for the sake of the service itself.”

After reading #futurePRoof, it’s a sentence that I keep coming back to.

Good, honest, hard working communications that takes a leadership role and speaks truth to power is something that cuts through many of the chapters in the book.

Here’s a truth. I love the NHS. I think it is the finest thing that Britain has given the world. But not everyone in the NHS is amazing and neither is everyone who works in NHS comms.

A short time after the news broke, I was at a conference where I overheard an NHS comms person attack everyone who ever criticises the NHS. It is a service that needs defending, he argued. It is a valuable service. It is. There was an embarrassed quiet when I pointed out that I was from Stafford and I genuinely wished that someone had listened to the criticism. So, while I love the NHS I know that sometimes it doesn’t work well and that shouldn’t be spun under the carpet but acknowledged and listened to.

The journalist who writes in the collection is right. We need the good NHS comms people to win the battle over the poor ones. Not just for my sake, but the sake of the service. Comms people should be the canary in the mine as well as being those seeking to explain the work of the organisation.

My family’s experience of the NHS

At its best, the NHS is amazing, My two children may not be alive but for smart-thinking midwives. My brother-in-law almost certainly wouldn’t be here. You probably have your own story, too. Ipsos Mori research puts Doctors and Nurses as the top two trusted professions trusted by more than 90 per cent of the population and there is a reason for that.

There is much good practice in the the third #futurePRoof. An account of the NHS visual identity update for 600 organisations is a useful starting point for someone struggling with the visual identity of one organisation. Ideas on working as part of the leadership team not the comms team are valuable. The importance of data and delivering against corporate objectives can’t be repeated too often. The NHS is an institution that needs critical friends and this book is that.

It should also be celebrated for focusing on the public sector. Here, good communicators can literally save lives.