“It is,” as Walsall’s finest Noddy Holder annually says, “Chriiiiiiiiiiistmas.”

Or rather, it’s only Christmas when you hear Slade, eat a mince pie and argue over presents.

Well, it always was until the recent addition nine years ago of the launch of the John Lewis Christmas TV advert.

And 2016 has been no exception. Here is the advert with Buster the Boxer:

Contained within it is everything you need to know about comms in 2016.

What is launched on TV now instantly shared across social media, the Press, TV, radio as well as the watercooler. While the launch on TV itself was co-ordinated the social media launch was simultaneous. So, while you watched the telly you may have surfed a tablet. You’d have got the content there too.

@danslee still haven’t got down to watching it. Been hearing about it all over Twitter 🙂

Within 48-hours 7.4 million views had been recorded on YouTube. The views figure was 25 million for Facebook. It will be interesting to see how these figures map out in the coming weeks. Often the buzz is translated to quick views on Facebook then YouTube catches up. 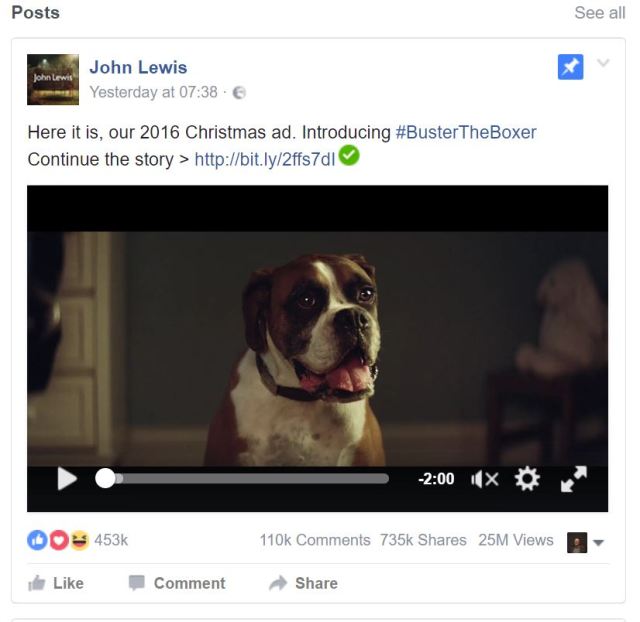 It’s about the emotion not the

The John Lewis Christmas ad has been about making you feel something. Often, shared values. Friendship. Companionship. Family. This is fascinating. If we feel we are being sold to we get defensive. If we are connected with an emotion we open up. So we buy things from them.

The traditional media are a key part of this.

The content was embedded in newspaper websites and shared extensively across the internet. The new TV-ad also competed for column inches in the print editions too.

It’s been something I’ve spent a lot of time talking about. Video is a powerful platform for content. The skills of story telling learned around a camp fire are still valid. The language of film is the langiuage of the web. Story telling arts learned by journalists are still relevant. At two minutes 10 seconds the video works on YouTube.

It’s not Christmas unless there is a parody (part one)

A video made in the summer by a student for an A-level project got 1.2 million years after it was picked up by the internet. A heartwarming story of two snowmen in a snowglobe was made and tells a love story. Aaah. How 2016. We can make our own content and it can be huge.

It’s not Christmas unless there is a parody (part two)

An Adam and Joe-style parody was made and posted within 24-hours of the original with toys taking the place.

Honestly, I don’t remember this happening when I was a kid. Woolworths just made their pile them up and sell them quick tour of the aisles that featured the Goodies and that was that. Nobody was moved. Nobody felt compelled to critique it. Yet, the internet was quickly filled with people taking a strongly-held view of how they thought the advert made them feel. It is, after all, an advert. Not the Christmas Day night Only Fools and Horses special.

Brandjamming is a thing, apparently, not a made-up word

It’s hard to know what words will emerge in 2017. In late 2016 I came across ‘brandjamming.’ No doubt this is because I live a sheltered life. It’s when a campaign gatecrashed the brand to campaign for brands to avoid spending money with newspapers who they say are taking a hardline view of Brexit and other matters.