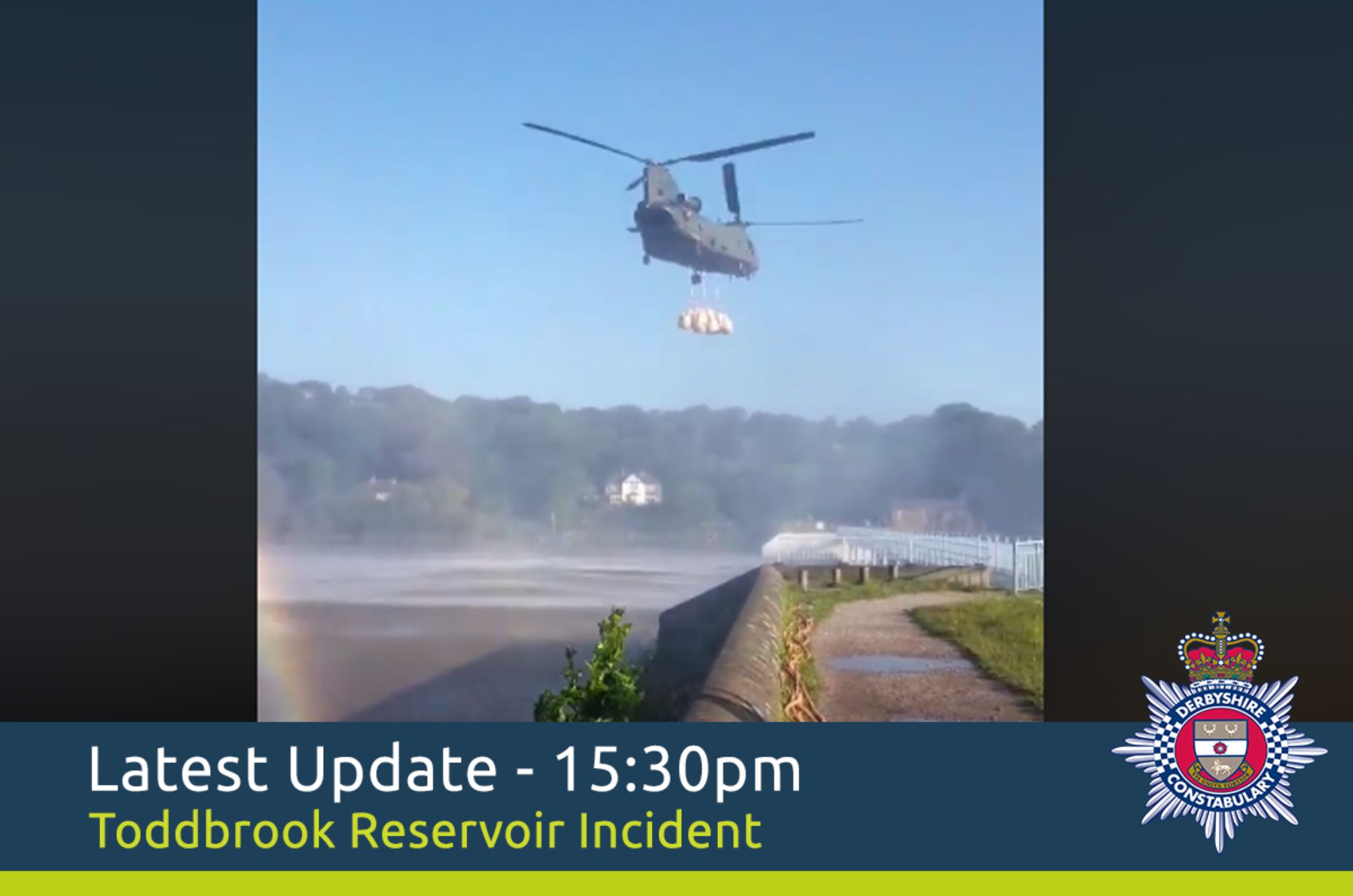 Earlier this year a dam burst near the Brazilian town of Belo Horizonte and within minutes 40 were dead and 300 missing buried under thick brown sludge.

Heavy rain at the Toddbrook Reservoir saw the dam overspill and the 170-year-old dam wall start to disintegrate.  There were fears it would lead to the wall collapsing and a million gallons of water flooding down onto the Derbyshire town of Whaley Bridge below.

An emergency operation kicked in with 1,000 people evacuated from the 6,500 population.

But how did people stay in touch?

And how did organisations reach people to get a message out in the seven days when the town held its breath?

How was there not mass panic?

The answer was a range of bush telegraph, word-of-mouth, phone, radio, TV and social media.

After seven tense days the dam wall was repaired and the water was pumped out, the was no collapse and the evacuated were allowed home.

Now the dust has settled I took a look at the role Facebook played in the operation to see what lessons I could learn. Turns out there’s a stack.

It was an incident played out on Facebook both corporate pages but also on station accounts and the community-run Whaley Bridge community page whose admin was a vital part of the local news network.

Traditional news sites covered the incident but I focused on fire, police, council, ambulance and the community Facebook page.

Yes, people in an emergency want to be kept updated through the corporate Facebook page

Often times, as a trainer of communicators I’m looking at ways to turn heads and get people interested. In this incident, there was no need. There was a captive audience of 6,500 Whaley Bridge people. The challenge was to get information out.

Of the four corporate pages, the most commented, shared and reacted to was the Derbyshire Police corporate page. This was no surprise as they were leading on the evacuation. Throughout the seven days they kept a running commentary with regular updates on the position of the repair and pumping as well as the evacuation plan and reassurance that those evacuated homes were being monitored. Other agencies concentrated on what they were doing and there was a level of sharing the police general updates.

The Derbyshire Police page was an information lifeline

From a distance, there was a number of things that worked.

Time stamping each update worked to build-in obsolescence. So, an update at 3pm was marked as 3pm on the image. In a fast-developing scenario this felt like a useful tactic to do.

Writing in plain English for Facebook. Each update was clear and concise. Each gave  the impression the content had been specially shaped for Facebook. Each had a calm and informative tone of voice. This was not a press release cut and pasted but something for Facebook itself.

Updates had new first-hand content. People wanted to know what the issue was and what success looked like. Knowing that reducing the water levels was all-important images of the water level being reduced were important.

Replying to comments. With more than 7,000 comments over the seven day operation the comms team had their hands full. But commenting helped warn, inform and reassure the public. They were also able to respond warmly to messages of thanks.

Openness made a bank of goodwill. The operation didn’t go smoothly. There was an evacuation of 1,000 people and then the halt to the operation which let some people home to gather pets and medicines. That could have gone badly. What played out on Facebook was praise for the emergency services that helped them.

Updates were in real-time and regular. There was an appetite to update Facebook regularly. The impression given was that Facebook was a prime channel rather than an unmonitored after-thought. When there was an update it was posted. But the gaps were not too long. 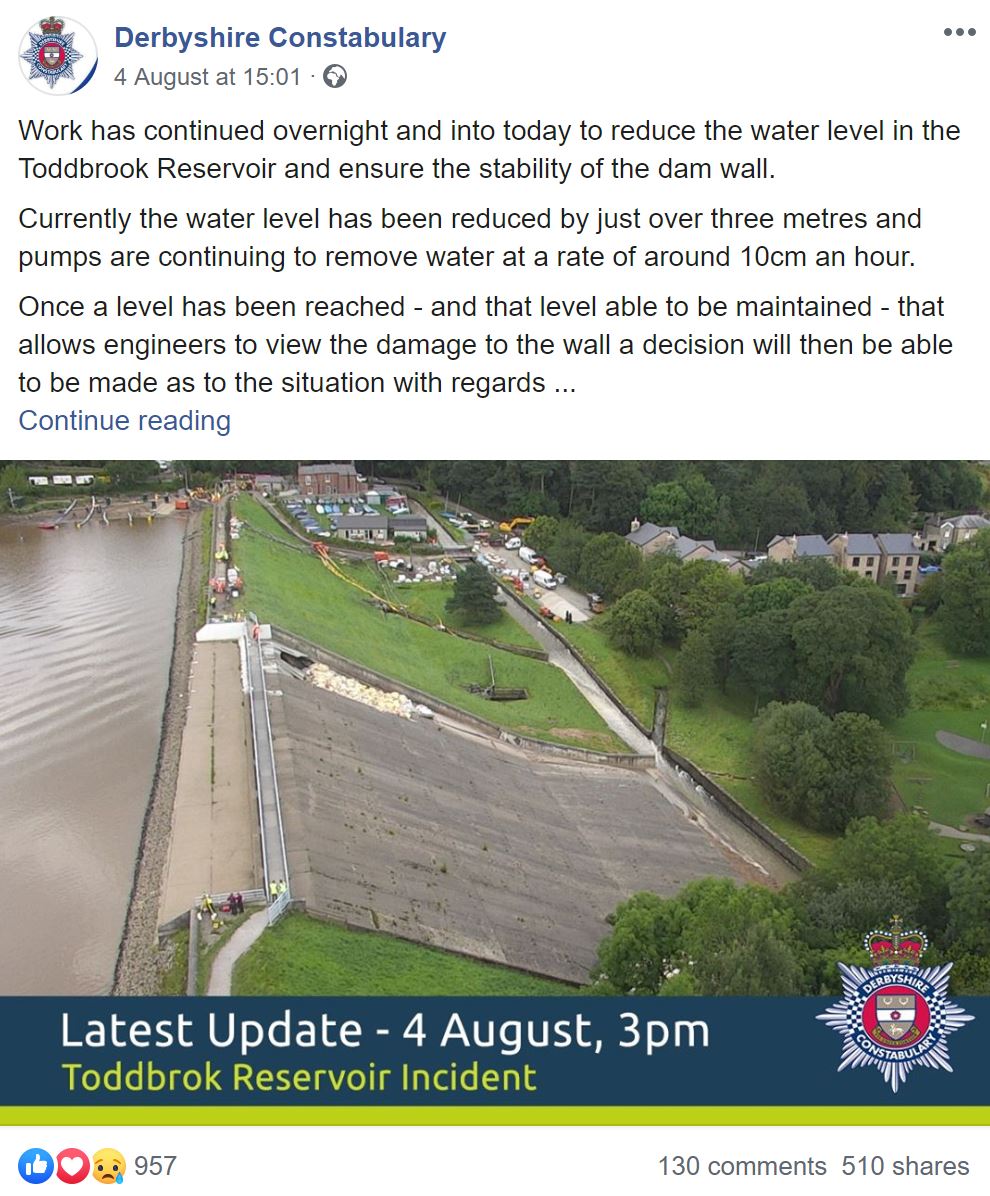 But some of the best content came from devolved station pages

Sharing the sweets is something I’ve long argued for. By all means have a corporate page giving the official line but if you give the people on the ground the trust and training you’ll be surprised at what you find.

Here, there were two station Facebook pages, the Melbourne On-Call Fire Station page and the Staveley Fire Station page. More than 30 updates were shared from the scene and shared more than 500 times across the community.

This incident confirms the important role a responsible community-run Facebook presence can have as a force for good. It’s a reminder that one of the main places people get local news is local Facebook.

Eye-witness content underpinned the corporate message. Both stations created good eyewitness content at a time when the immediate peril had passed. Images of pumping operations and reduced water levels showed the message in action.

It showed the human face. The tired firefighters that have worked through the night gave an opportunity for the community to thank them for their efforts. What was striking was the messages of thanks and support. That must have had a value to firefighters tired after a long shift.

The Whaley Bridge community page was at the heart of it

The town has 6,500 residents and 5,600 members of the Whaley Bridge page.  So well connected was the page admin was that he was in the room when the decision was taken to evacuate.

Happily, the page admin hung back to first allow the authorities to make the announcement that 1,000 people would have to move out as the dam was at risk of breaking.

The Whaley Bridge page was at the heart of the community network posting 74 times across seven days with 12,622 reactions and 2,180 comments and 2,647 shares. Rather than being a simple sign-posting operation to forward on the official police post the admin worked to reflect the work on the ground. The tenor of the posts was supportive.

It’s possible the task could have been harder if the page admin had had an axe to grind.

This is a reminder that the Facebook admin in the community is just as important as the local reporter. In many ways, they are more important.

On-the-spot content. The Whaley Bridge page was busily creating its own content from the town and in many cases from close to the dam itself.

Evidence worked. When people wanted to see evidence of progress the pictures that confirmed this did well. While the Chinook shots got lots of attention it was the shots of the water levels being reduced that really engaged with the community.

Re-sharing some corporate content but not all. There was plenty being put out by fire, police, council and ambulance. But only a selection of it was shared.

People responded really well to the people helping them. A blurred shot of a worker making a cup of tea in the requisitioned sailing club house was the most popular piece of content. An expression of gratitude to those who were helping them it is as British as a cup of tea. 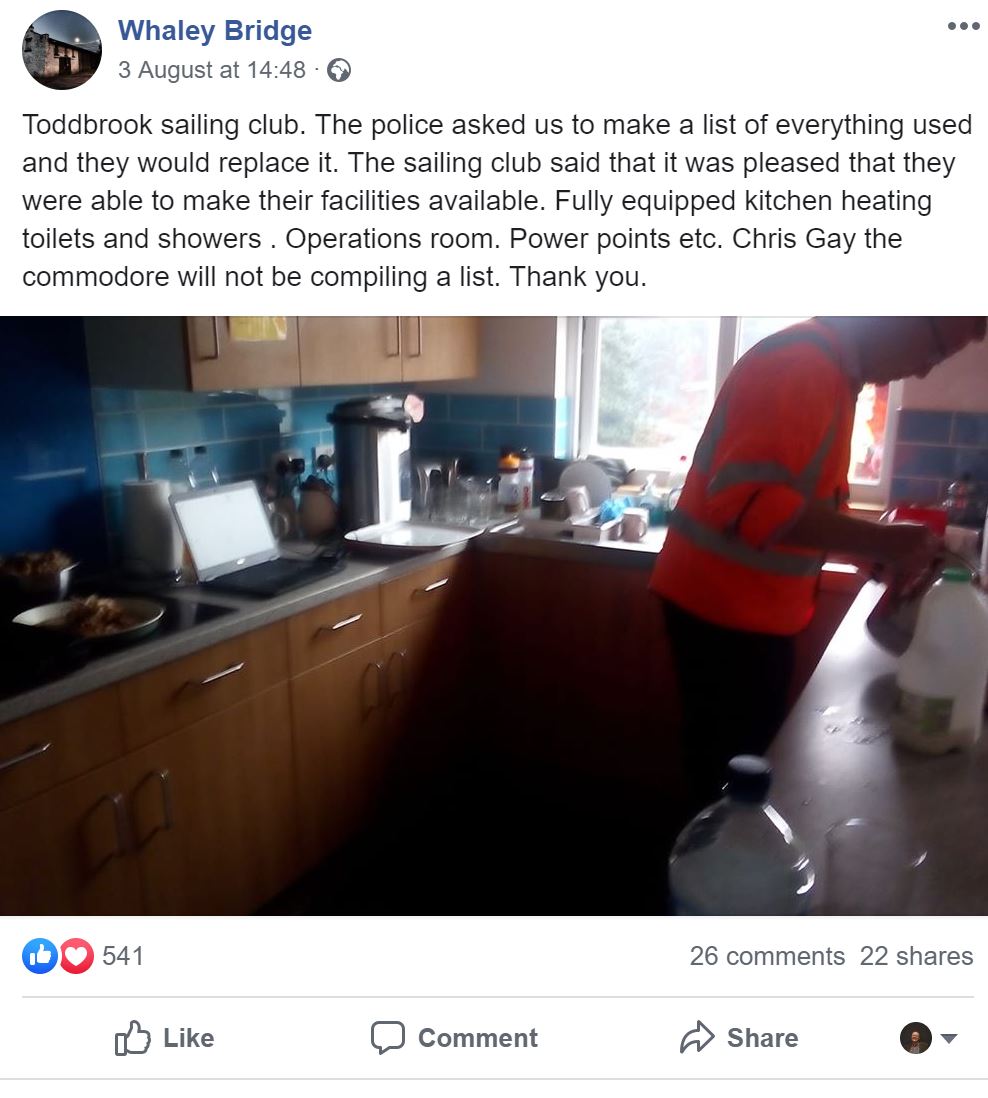 They were flooded by journalists. Looking to speak to local people the Facebook page admin was inundated with private messages from reporters. So much so he was telling them to stop messaging. In a crisis, news desk used to despatch a reporter who would be directed to the local shop or pub to gauge community feeling. Now, they also head to the largest community Facebook presence.

The story boiled down to something straight forward. Namely, that the dam wall will break unless the water level is dropped to relieve pressure and the wall is repaired. So, footage of the water level dropping through pumping and emergency repairs was gold.

The best footage was from the scene. Rather than have a talking head at HQ telling people something was happening they had action shots. This was a brilliant decision and spoke far eloquently than a senior person. ‘Don’t tell us, show us,’ was a well followed mantra in the crisis phase. Drone footage showed this well.

Facebook Live from the residents Q&A. More than 40,000 people watched the session where residents could ask questions. This was a cracking idea and was responded to.

Putting up the senior people. The council had some early sub-titled video of the council Leader while the police and fire service at the end of things wrapped-up with the most senior people they had. As a strategy this was secondary.

Facebook as the largest social channel is integral to the messaging in an emergency.

Regular and timely updates to fill the vacuum are needed.

Comments need to be responded to.

The idea of don’t just say it, show it works well.

Devolved Facebook presences can come into their own for creating content that can be re-shared by the corporate page.

What came through the more than 170 Facebook posts from the incident was a feeling of community spirit and a collective holding of breath until the danger passed.

Those involved should feel a real sense of pride.

I help deliver Facebook training for people in the public sector. More here. If you’d like help give me a shout dan@danslee.co.uk.