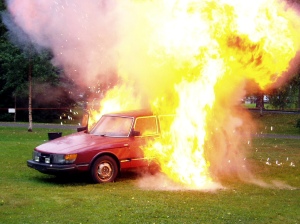 “Of course,” said John Lennon in passing, “the problem is we’re bigger than Jesus.”

Always put the most eye-catching quote in the first par of a feature is indeed a handy trick to know.

It reels the reader in and makes them want to read on. Same for pictures too. Get something arresting and witty.

Two things I’ve learned over three years as a blogger. There. Now they’re yours.

Only thing is, a Beatles quote and a picture of an exploding car doesn’t work when it’s a reflective piece. Unless, of course you use them as a device to get people reading and keep them reading by offering blogging tips in amongst the reflection.

Tip three:  Have a very understanding partner who doesn’t mind you hammering into a laptop when she’s watching the telly.

Tip four: Don’t worry that your first few are rubbish. It’s the law.

Now for some reflection. Three years ago I started to blog to add to the debate and conversation. There were many people I admired and respected and very few of my contemporaries are still at it. Many have moved on and are now turning their talents to other things. Realising this made me feel a bit lonely. Every blog has a lifespan. It made me think of what this blog’s timeline would be. We Love Local Government was a blog that was a cornerstone on the digital landscape. Speaking to the people behind it Glen Ocsko and Gareth Young a while back I felt a burning sense of kinship.

“Sometimes you really don’t want to write something,” one said “but you sort of have to because you’ve set yourself this deadline. Which is mad because it’s all self-imposed.”

Tip five: Write where you feel comfortable. In a chair. On the train. At the kitchen table. Vary it if it helps. But give yourself a weekly deadline.

One lapsed blogger Ingrid Koehler drifted through my timeline today. Ingrid used to work at the IdEA. It’s criminal that her talents have been lost to the public sector. She is responsible for some great work and much of it stands the test of time. Like her Connected Councillors guide, for example.

Ingrid used to collect case studies and blog them insanely early the morning. It was one of the many inspirations for comms2point0 a blog about comms and PR and an idea that Darren Caveney came up with that I sprinkled some hundreds and thousands on.

I spoke to another lapsed blogger today too. Sarah Lay is still passionate about what she does but has taken a conscious step back from writing.

We spoke of how the great mountain of work and case studies on digital innovation in local government has been produced in people’s spare time. In my corner of the allotment, it’s about public relations and communications.

We also spoke about how you can only go so far to embed good digital practice by out-of-hours work and unconferences. We’ve both thought at one time or another that they were the golden bullets.

We agreed that if local government is serious about mainstreaming change then the bright sparks doing the innovation need to be able to have room – and funding – to create and share the best practice sweets.

Tip six: It doesn’t matter what you write about is niche. It’s your niche and you’ll be amazed at how you’ll find fellow travellers.

On a lighter note, three years on and Hyper WM is going from strength to strength. A loose collection of local government people help run it. This time, Sandwell Council chief executive Jan Britton and officer Liz Onions have chipped in and former Birmingham City Council officer Si Whitehouse is taking a lead this year. The first 50 tickets went in 24-hours. If you want one go here. Quickly. It makes me feel quietly proud something that was quietly floated on this blog  following a Eureka conversation with Si Whitehouse has taken root with help, love, dedication and cake from a bunch of others. A handful of people read that blog post proposing it. But the good thing was that several of those that did wanted to come and wanted to help. That’s the beauty of a blog post. It circulates an idea cheaply.

Tips seven to ten: Write about things you are passionate about. Write one every week. Post what you write on Twitter and add the #weeklyblogclub hashtag for a ready made audience.

Since I started there are new bloggers in and around local government whose work I love. There’s comms officer Stuart Macintosh from Redcar & Cleveland Borough Council, Ross Wigham head of communications at Northumberland County Council, London social worker Ermintrude2, Carolyne Mitchell in Scottish local government and from the US Jim Garrow who is doing some brilliant stuff. Matt Murray in Brisbane Australia is doing some great stuff with photography. Kate Hughes does housing comms really well, Helen Reynolds of Monmouthshire County Council writes some cracking stuff in Shropshire Jon King  and Kate Bentham  are doing some brilliant things as is Phil Jewitt at Leeds City Council while the weeklyblogclub initiative skippered by Janet Davis is a constant source of good content.

Whatever the future holds for me I’m sure that it will be in part because of the work I’ve done and shared. I’m certain of that.

Tip eleven: Compfight is a brilliant tool to search for creative commons pictures for blogs (especially ones of people smiling which draw you in.)

Tip twelve: Don’t write too much. A few hundred words will do. That’s why I’m ending this post here.

Around 3,000 people read this blog every month which is slightly mad. If you’ve read, commented, shared or taken something from any of the 120 posts I’ve written in the last three years from me to you: ‘thank you’.