It’s always good to show people Twitter when they don’t use it themselves.

Isn’t Twitter Stephen Fry talking about his tea? Isn’t it a load of noise? Isn’t it a waste of time?

I was sat with two people who don’t get Twitter.

Instead of explaining, I asked Twitter a question. It’s sometimes amazing the response you get.

I posted the following question:

Then several people started to chip in with what they thought.

@Mike_Rawlins posted something daft about #brewcamp. This is an event I’m looking to do with Mike and a few others.

Then @adrielhampton posted. It can amplify what matters to you. When I showed them his Twitter profile they started to get interested. 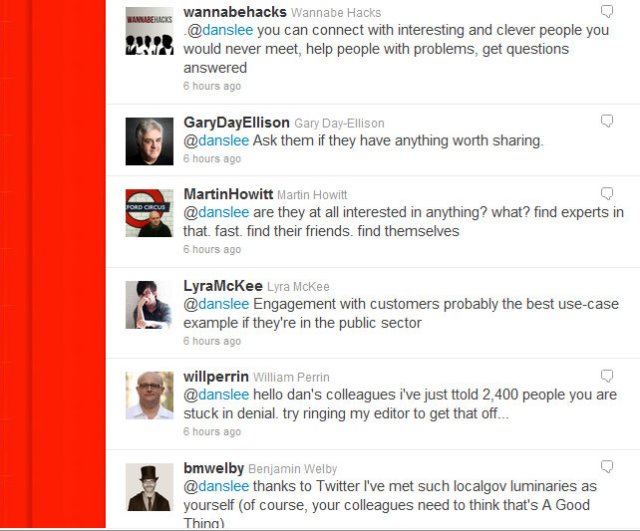 “So who is Will Perrin?” they ask.

“Oh, he created the e-petition platform at 10 Downing Street. He does Talk About Local. They support hyperlocal blogs.”

I show them some hyperlocal sites they’ve not seen before.

I talk about Pits n Pots in Stoke-on-Trent and a few others.

We talked about how we could use the platform for the council.

“Are they interested in anything?” one posted. “Find experts in that. Fast. Find their friends. Find themselves.”

Their faces change from confusion to awe.

“I’m starting to see the point now,” one said.

I show them hashtags. I show them how I can find out what’s happening at Stoke City, in local government and I show them the UK Govcamp hashtag #ukgc11.

I show them #xfactor because that’s a TV show that one likes.

I tell them that you can watch TV and get a real time running commentary on the programme you are watching via Twitter.

That gypsy wessing fly-on-the-wall programme they were talking about. I heard all that on Twitter and I hadn’t even got the telly on.

US people who specialise in emergency planning had started to contribute.

One tweeter reminded me of the @savebenno campaign on Twitter.

That was a campaign to highlight the unfair dismissal of a 2nd XI village cricket skipper.

It ended up with the team I was playing for playing a Save Benno XI.

“Wow,” my other colleague said.